About the Mirari Brass

Engaging and eclectic, the Mirari Brass Quintet brings a spirit of joyful collaboration and innovation to music spanning many centuries and genres. The commissioners of multiple new works for brass, the group performs a spectacular tight-rope act, balancing intensity with levity and refined virtuosity with pure fun.
Founded in 2009, Mirari has performed extensively across the United States, forging connections with audiences through lively and polished performances. The group has performed and presented outreach programs in 30 states on concert series as well as residencies at numerous universities including Cincinnati Conservatory of Music, University of Tennessee at Knoxville, University of Kentucky, Ohio State University, Cornell University, SUNY-Potsdam, and many more. Mirari has also been featured at a number of major conferences and festivals including the International Tuba and Euphonium Conference, the International Trombone Festival, and the International Trumpet Guild Conference. In 2017, the group made their first international trip to China, performing concerts and presenting educational outreach programs in Beijing, Haerbin, Dalian, and Chongqing.

Since its inception, Mirari Brass has added nearly two dozen works to the brass quintet repertoire, with group members also contributing a number of arrangements and original compositions. Their debut album, Spires (2012), offers as its centerpiece Mirari’s commissioned work from Rome Prize-winner and Guggenheim Fellow Eric Nathan, adventurously contextualized by works from the Renaissance and Baroque periods, as well as jazz standards re-imagined and transformed. In 2015, Mirari embarked on a collaborative project with the Ohio State Wind Symphony and a consortium of numerous universities, commissioning composer Clint Needham to write an extensive concerto for brass quintet and wind ensemble. The resulting four movement work, In These Hallowed Halls, was premiered in November 2017. In January 2018, Mirari released their second album, Renewed, Reused, Recycled on Summit Records. The group also received a Chamber Music America Residency grant in 2019 partnering with Capital Area Alliance for the Homeless and Community of Note based in Baton Rouge, LA.

In addition to being outstanding performers, the members of the Mirari Brass Quintet share a unique passion for music education and are all collegiate professors of music. The group relishes and seeks out extended time to interact with young musicians by leading masterclasses, offering group and individual instruction, as well as presenting clinics on topics such as brass fundamentals, the art of chamber performance, and entrepreneurship. Through their educational endeavors, the quintet examines all aspects of life as an artist and helps to foster the development of complete musicians. Individually, the group members have been on faculty at colleges, universities, and music festivals and camps all over the United States and overseas. As a way to share their knowledge and experiences with musicians and music lovers alike, Mirari has a podcast, Mirari: UNMUTED, available on Spotify and iTunes,.
​
Aside from the traditional brass quintet setting, the members of the Mirari Brass Quintet often perform duos or trios together. Steph Frye-Clark (tuba) and Sarah Paradis (trombone) enjoy presenting commissioned and arranged works for their duo Bell(e) Collective. As a central tenet of the group, and by their name’s definition, all Mirari members share an admiration and respect for each other not only on stage and in music, but also in friendship.
Mirari Brass Personnel 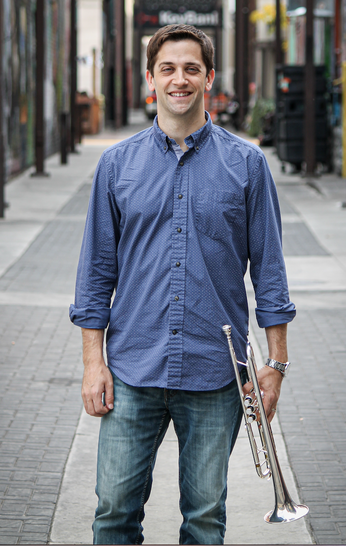 ​Matt Vangjel grew up a “military brat” moving frequently around the country, as well as abroad. He began his love affair with the trumpet at age 11. His dream has always been to tour the world as a performer so he is thrilled to be a member of the Mirari Brass Quintet! Currently, Matt is the Associate Professor of Trumpet at Louisiana State University. Previously, he taught at the University of Arkansas-Fort Smith, Northwest Missouri State University, and as an adjunct instructor at the University of Missouri-Kansas City (UMKC). Matt earned performance degrees at UMKC (DMA) and the University of Michigan (MM). His bachelor’s degree is in Music Education from James Madison University in Harrisonburg, Virginia, and music education for all ages continues to be a significant and enriching part of his life. When he is not teaching, Matt is an active performer. He is currently the Principal Trumpet of the Mobile Symphony Orchestra and is a long-time member of the internationally-acclaimed Fountain City Brass Band. Matt also released his debut solo album, Still and Quiet Places, in 2019! On the rare occasions when he doesn’t have a trumpet in his hand, Matt is most likely spending time with his family or outside playing some kind of sport. Check out Matt’s website here!
​ 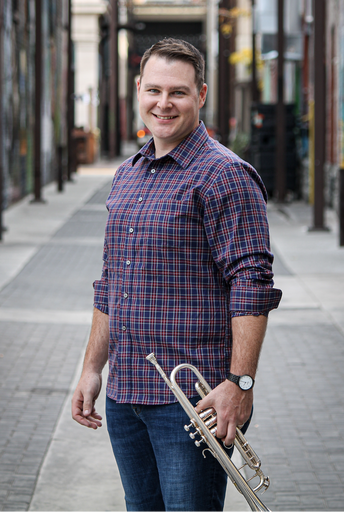 J. Peyden Shelton is currently the Assistant Professor of Trumpet at the University of Utah. Before his currently position, he has served on the faculties at the University of Rochester and Cornell University. Peyden has performed as both soloist and ensemble member with numerous groups including the Utah Symphony, Rochester Philharmonic, Washington Concert Opera, Symphony Number One, New World Symphony and Salt Lake Symphony. He also is a member of several chamber ensembles including Fifth Bridge (fifthbridge.org), the Mirari Brass Quintet (miraribrass.com), and Nova Trumpet Collective (@novatrumpets).
​
Peyden has a respected reputation as a clinician having presented for universities, schools, and conferences all over the world. He serves on numerous committees for the International Trumpet Guild including as the Chair of the ITG Orchestral Excerpt Competition. Peyden has written several articles for the ITG Journal and has been a featured presenter at their International Conferences.

Peyden holds degrees from Virginia Tech (BA), the University of Miami (MM), and the Eastman School of Music (DMA). He can be heard on Summit Records, SNOtone Records, Mark Records, and in the 4th Edition of the Samuel Adler’s The Study of Orchestration textbook by W.W. Norton & Company. Dr. Shelton is also a Yamaha Performing Artist.
Visit Peyden's website. 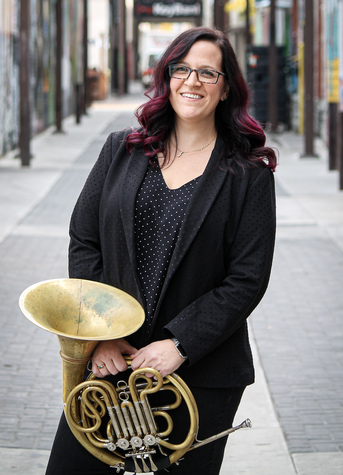 Jessie Thoman is excited to be living a life in music! A lover of snow she is appropriately a native of Buffalo, New York. Jessie, the Professor of Music at the University of Tennessee Martin, has held principal and section positions in the Paducah Symphony Orchestra (KY), Columbus Indiana Philharmonic (IN), Terre Haute Symphony Orchestra (IN), Bloomington Symphony Orchestra (IN), Cardinal Stage Pit Orchestra (IN), Camerata Orchestra, Reno Jazz Orchestra (NV), Reno Pops Orchestra (NV), Reno Wind Symphony (NV), and the Reno Chamber Orchestra (NV). She has also performed in the horn sections of the Arkansas Symphony Orchestra (AR) and the Naples Philharmonic (FL). Jessie is the founder of the Mirari Brass and is thrilled to share the stage with four of her best friends! After finishing degrees at the Crane School of Music at SUNY Potsdam (BM), The Ohio State University (MM, MA) and Indiana University’s Jacobs School of Music (DM), she is now active as a teacher and performer. Along with winning positions in professional orchestras, Jessie also teaches, freelances, and has performed with artists like Jeff Nelsen, Andre Watts, Leonard Slatkin, Michel Camilo, Sylvia McNair, Eric Ruske, Maureen McGovern and the Count Basie Orchestra. Jessie has been a featured artist at horn and brass days, and is active in presenting lectures, seminars, and workshops on Jeff Nelsen's Fearless Performance for Musicians concepts and Mindfulness at high schools and colleges all over the country. Known for her unabashed laugh (and lots of it), Jessie also loves singing, and everything Broadway.
​ 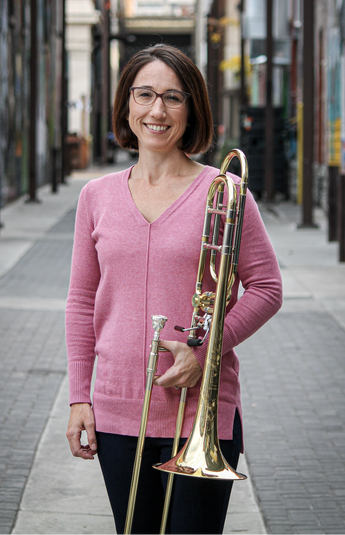 Trombonist Sarah Paradis is the Associate Professor of Trombone and Euphonium at Boise State University. Paradis earned her B.M. in Music Education from Ithaca College, her M.M. in Trombone Performance from Indiana University, and her D.M. in Brass Pedagogy from Indiana University. An avid orchestral musician, Paradis has been a member of the Richmond Symphony (IN), Springfield Symphony Orchestra (OH), and the Ohio Valley Symphony. She has also played with the Hawai’i Symphony Orchestra, Spokane Symphony, West Virginia Symphony Orchestra, Boise Philharmonic, Boise Baroque Orchestra, Opera Idaho, Akron Symphony (OH), and the Owensboro Orchestra (KY). She was a prizewinner in the Susan Slaughter Solo Competition, and was awarded the Trombone Fellowship at the Aspen Summer Music Festival. Paradis practices yoga daily and incorporates the benefits of yoga and meditation into her own performance and teaching. Her “Yoga for Musicians” masterclass helps high school and college students explore the many ways in which yoga can augment their musical journey. Paradis is an S.E. Shires performing artist and lives in Boise with her family. To learn more, visit Paradis’s website.
​
​ 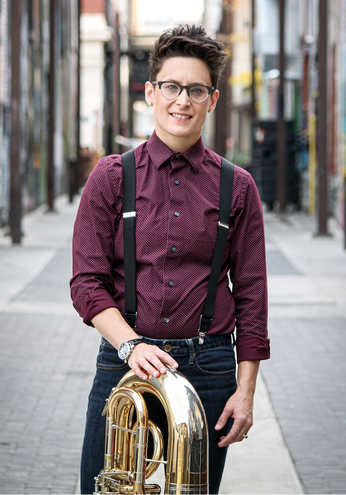 Originally from Birmingham, Michigan, Steph Frye-Clark is an active soloist, chamber musician, and orchestral performer across the country. They are currently on faculty at East Tennessee State University, and previously held positions at University of Wisconsin-Platteville and Concordia University Wisconsin. Steph is a member of multiple chamber groups and has performed with orchestras across the Midwest and south. They have considerable experience teaching students of all ages. In addition to their work at ETSU Steph maintains a private low brass studio and since 2011 has been the low brass instructor at the Lutheran Summer Music Festival. Steph received the Doctor of Musical Arts degree in Tuba Performance from UW-Madison. They also received their Masters degree in Tuba Performance in 2010 from UW-Madison and has two degrees (Tuba Performance and Biology) from Lawrence University. In addition to the tuba, Steph’s interests and hobbies include running, cycling, hiking, backpacking and anything else that will put her in the great outdoors. Steph is a Miraphone performing artist.